futuRIGA
New centre of Riga, Riga City Council and the public administrative complex in Torņakalns
– a traffic circle,
– 4 boulevards – the basis of spatial organisation,
– Riga Forum – the square for the city,
– futuRiga is an urban environment rather than a monument

Existing situation of the city development plan
The competition site is located on the left bank of the Daugava opposite Old Riga. The territory is intersected by a railway line. The concept for traffic development envisaged in the Riga Development Plan – the Western Main Road and the access road to Zemgales Bridge would split the project site into separate parts, thus leading to occurrence of isolated, degraded territories. The task of the futuRIGA project is to create a unified and human urban environment and to improve the existing and proposed traffic scheme. Therefore futuRIGA proposes a new concept of traffic organisation and an urban development vision based on it.

1. TRANSPORT
Transport organisation scheme on the left riverbank
The Western Main Road envisaged in the Riga Development Plan is a highway that would split the urban environment in Āgenskalns, Iļģuciems and would separate Pārdaugava from the Daugava River. futuRIGA insists that in future the main Northern-Southern Transit Road on the left riverbank should not go along the Daugava bank, through populated areas. The more appropriate place for the highway would be next to the railway line connecting K.Ulmaņa Gatve (street) and the Northern Transport Corridor, thus forming the big circle around the central part of Riga on the right and left riverbanks. The urban solution for the competition site is based on futuRIGA’s concept of a transport circle that diverts transit traffic flows around the territory, creating pre-conditions for a unified urban environment. All external roads connect to the traffic circle integrating the territory into the Pārdaugava traffic system. The Western Main Road, the street with two carriageways in each direction, is diverted around the territory along the existing route of Vienības Gatve and Jelgavas Street, building a tunnel for crossing the territory.

Riga Forum – the main square
The four main streets crossing form the main square – Riga Forum that is both a nucleus of futuRIGA and a significant public space for the entire new Riga. The square comprises the city council and public administrative buildings, the Riga development information centre, as well as shops, restaurants and cafes, a conference centre and hotels. The big square is a place for political demonstrations and sports activities – roller-skating, street basketball in summer and a skating-rink in winter.

Train square
The railway track to the Railway Museum is retained. The tracks are built into the road surfacing (similarly as tram tracks), so that not to disturb the vehicle and pedestrian traffic. In front of the museum, where the railway tracks split into several tracks, there will be the Train Square integrating the museum exhibits into the public space.

Greenery
futuRIGA is located next to significant parks of Pārdaugava – Uzvaras and Arkādijas. The project territory includes the area where both parks blend – Mārupīte Park that is preserved building residential blocks beside it. A new park is created inside the territory which separates residential blocks from the most active parts of the district. The four main streets and a large part of subordinate streets are formed like boulevards – with a row of trees on both sides. It is also intended to retain the biggest growing trees.

Arrangement of public open spaces
Pedestrian flows from the Daugava waterfront to the new Torņakalns Terminal are led through the territory via several public open spaces – squares, parks and a boulevard. They are surrounded by important public buildings (the National Library, the Railway Museum, as well as the newly designed buildings – the complex of the Riga City Council, a conference centre, the Torņakalns Terminal etc.). Brīvības Street together with Uzvaras Blvd. form the most significant axis of Riga’s spatial perception in the west-east direction. Several important open spaces of public objects located in the old town and the centre of Riga adjoin this axis (the Boulevard Circle with parks, Monument to Freedom, Town Hall Square and Dome Square, churches, Dailes Theatre, Opera, Town Hall, Occupation Museum, etc.). futuRIGA also joins this axis making it even more significant.

3. BUILT ENVIRONMENT
futuRIGA is for urban environment and against objects in a park. Therefore the basic urban fabric is homogeneous, 4-7-storey high, often forming perimetric bocks with inner yards. Several high-rises enhance the identity, character and silhouette of the territory.

Construction of Riga Forum
The heart of futuRIGAs is its main square – Riga Forum that attracts around itself the most important public buildings – the city council and public administrative buildings. In the middle of the square there is an attractive and intriguing pavilion – the city development information centre, a place where to get information about the projects of the future Riga. Spatially Riga Forum is separated from the Train Square by the building where the Riga traffic information centre and museum is going to be located. So that to preserve a city atmosphere in the square, there should be shops, restaurants and cafes. A conference centre, a supermarket with a multi-hall cinema on the upper floors and two hotels adjoin the square. The new buildings rise as high as 6-7 floors.

High-rise
The high-rise of Riga Forum has a unique typology, which exhibits outwards its nucleus (communication – panorama elevators) thus symbolising the idea that only public administration and the society (the high-rise and the square) together form a single entirety and that only in a mutual interaction they can ensure sustainable and democratic development. The square becomes a public forum and high-rises extend as its vertical continuation. The upper floor of the high-rise is intended as a public space – a panorama platform, which is connected with the square by six panorama elevators. The upper floor is a vertical continuation of the square – “a wide urban inner space” from which “Riga can be seen”.

Soho
Soho – part of the territory that has preserved the remains of historic buildings that are now supplemented by new structures – finds itself to the northeast from the square. Comparatively narrow streets, small public gardens, mixed construction type. Here part of administrative and business buildings may be located.

Mārupīte Park
Residential blocks of Mārupīte Park are the quietest area in the northern part of futuRIGA. It is separated from the active part by a boulevard and a narrow strip of park. The buildings have 5 floors on the street-side and their height may diminish as they approach the park. The buildings continue the best traditions of residential construction in Riga – apartment houses typical of the 1920-1930s as well as aspirations of the 1980s – the so-called experimental residential buildings in the Riga historic centre characterised by perimetric blocks with spacious inner courtyards.

Residential area of southern part
The residential area is separated from the office complex by a belt foreseen for sports and recreational activities. The construction intensity is lower in this area, apartment buildings are mostly 4-storey high. Although free-standing the buildings are grouped in blocks with a common inner courtyard. This area is abundant in greenery. Public functions, kindergartens etc. may be arranged on the ground floors of separate buildings, but shops and other commercial activities may be set up in the buildings along the street leading to the station.

Commercial objects along Vienības Gatve
Development of commercial functions is foreseen in the south-western part of the territory at Vienības Gatve, next to the Torņakalns Terminal. Here a medium-sized trade centre, a hotel or office buildings may find their place.

Parking spaces
AParking spaces are arranged under several courtyards and office buildings, under the trade centre, there is also a Park & Ride parking lot at the station.

4.TORŅKALNS TERMINAL – PUBLIC TRANSPORT HUB
The Torņakalns Terminal finds itself in the south-western end of futuRIGA, at the railway. It includes a new railway station, a bus terminal and Park & Ride multi-storey parking lots. The railway station has 2 platforms, the building rises above the railway tracks. On the first-floor level all buildings are connected by a co-terminal. The existing building of the historic station retains the information centre and the memorial to the repressed. A rail-transport connection (a tram or a shuttle train line) with the airport would provide the territory with a large potential for development.
.
.
.
“futuRIGA“. „Jaunā Rīgas centra Torņakalnā, Rīgas domes un valsts administratīvā kompleksa pilsētbūvnieciskā vīzija” 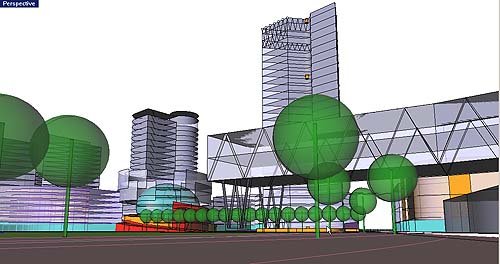 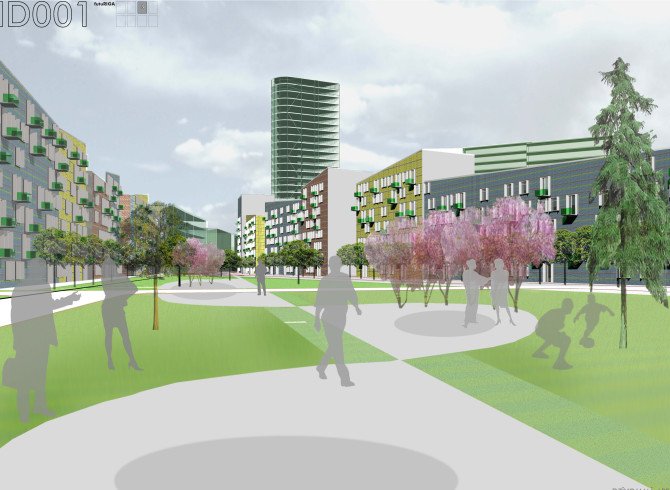 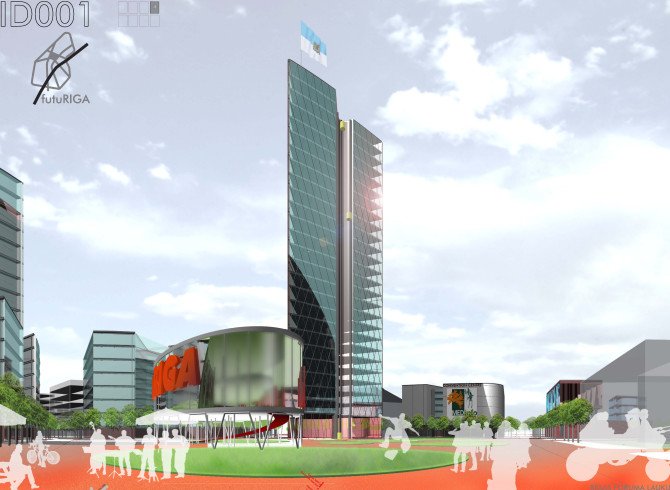 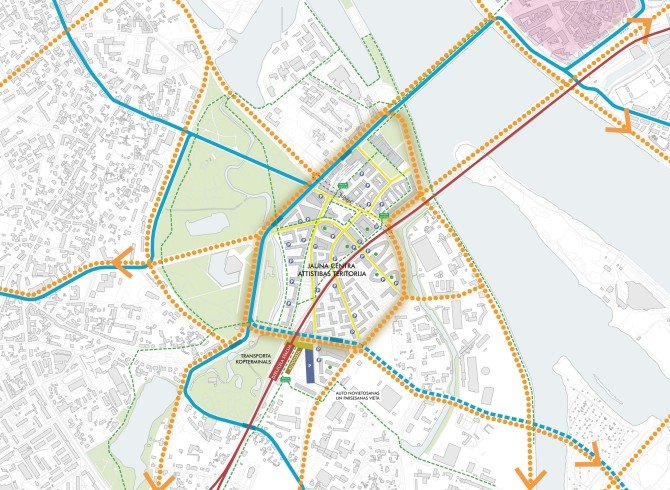 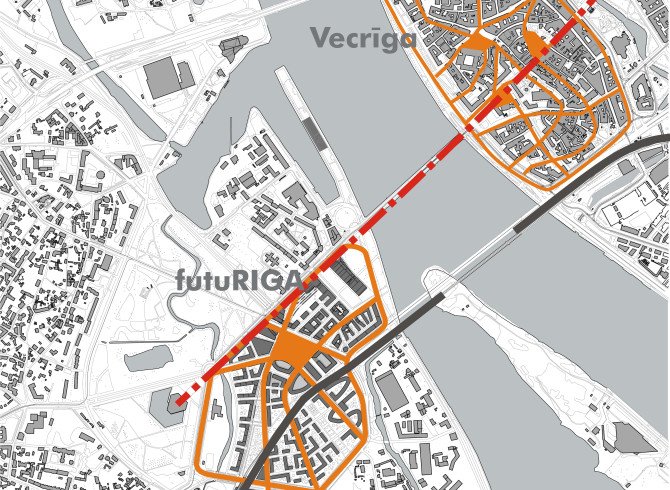 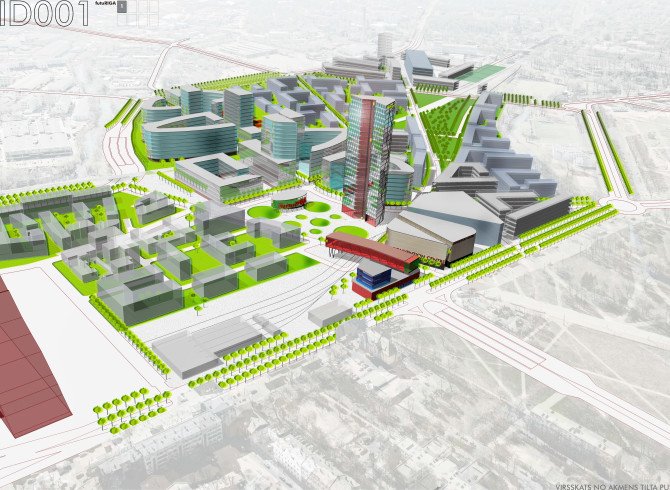